↓ Skip to Main Content
Home › ScatteredNotes › You Are Commanded To Write Thusly. Or Whatever.

You Are Commanded To Write Thusly. Or Whatever. 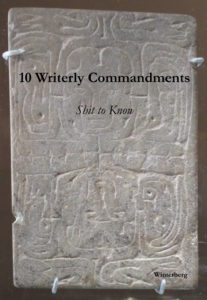 Very recently I wrote The Writing Commandments For Self as a guide for writer self-preservation. It’s there for writers’ to stop beating themselves up over their writing.

It got me to thinking, yeah, I do it on occasion.

There should be some writing tips/commandments/ideas/thoughts/etc. because no one ever has put these into the Internet machine.

So, without further blather, I give upon thee My Writing Beliefs, which may or may not end at ten. But most likely won’t, except in this post.

Lastly, I know what you’re thinking, “Will this be on the test? Must I remember these?”

The answers you will not like. They are, in order, yes and yes. You will like exactly what you are given.

This is not a Sisyphean task. Words on paper and all that stuff. You need the practice and everything you write is practice. Even the most bumptious bastard among us needs to practice.

Think of your writing practice as a fuckbucket of more. Always more and more. And more of a good thing is, well, a good thing. Therefore, whether your thing is pterodactyl erotica or the Luddite manual on reversing technology, write.

This is not one of those things that offer the illusion of accomplishing something. Practicing only makes your words better. And you want better words.

2. You Shall Have Alligator Skin.

Not literally because that’d take a lot of lotion to smooth out.

But the thickness of your skin is a precursor of your ability to handle the slurry of words that shall be spewed your way in regards to your ability or inability to write well.

Think Great Wall of China thick because putting your writing out into the world and asking people to review your work is like asking…well, it can be harsh.

And people can be unforgiving once you ask them to read and review your writing, especially if said writing is sucky.

The rule here would be, Don’t Have Sucky Writing, but in reality, not everything is our absolute best, so refer to Commandment number one.

3. You Shall Be Critical Of Your Work.

If you’d prefer eat a bowl of thumbtacks rather than read your own work, cut and paste this writing commandment to the inside of your eyeballs.

*stares unflinchingly at you. I’ll wait.*

Your goal here is to have the ability to read that of which you’ve written and not destroy it with scatter bombs full of paperclips or get stabby with a scissors.

(Which leads to Writing Commandment 3a: Never Destroy Your Writing.)

Here’s the catch: the better you become as a writer, the more critical you are of your writing. You’ll be able to wade through a puddle of shit to know if your shit, is indeed, shit.

Critical attention to your work only increases your ability in style, characterization, and story construction.

Also, and always: you owe it to yourself, but more importantly, YOU OWE IT TO THE READER.

Sucking is part of a writer’s life.

So yeah, Imma rephrase that: A writer will have ups and downs. Sometimes the writing will be only meh, while at other times it will shine like a bright blinding light careening your car off the cliff.

Your goal is, sometimes, to be able slip the noose that hangs your writing. Be the curator, not the undertaker, of your writing.

A good rule in not sucking is don’t finish the last sentence of your book with HUH WOOZAH WUZZA WUZZA MUUUUUUUUUUUURRRRRRP FLURP. Just sayin’.

When you’re hungry, you eat.

Think of reading as food for your brain. Well, more food. It expands your mind in ways that only science understands, probably anyway.

It also teaches you how to write, and at times, how not to write.

6. You Shall Love The Process.

Do this now: open your arms and embrace your writing process.

Here’s the thing about the writing process: IT’S DIFFERENT FOR EVERY WRITER. Find yours. Hug it. Keep it. Allow it to flourish. Keep tweaking it. Make it perfect. And make it work for you.

7. You Shall Edit Like An Editor Even Though You Aren’t An Editor.

It’s even worse if you wrote the story. It’s a gi-hugic pain in the ass. In other words, it is perhaps, just maybe, quite possibly, but probably mostly, the worst thing ever.

Because there’s too much bias involved in your decision to cut, chop, and dice. You’re too close to the damn story, but being able to edit it is more than just spelling words correctly and checking punctuation. It’s removing dull parts. Slicing out pieces that don’t contribute to the story. Making sure your story has flow. And so much more.

For me, editing is part of tweaking my work. I’ll write and then go over it the next day. When I hit 10-20K words I’ll go through the piece and re-check stuff. Cut things, if needed; or add things, if needed. The end result is a story that I can hand over to my professional editor and let her do her thing and make it better.

A note on editing your own work: Do not allow your lack of attention to detail to be completely underwhelming in your editing effort.

8. You Shall Show Your Shit.

You hear this a lot as a writer, “Show, don’t tell.” This, in itself, is confusing because as a writer, one tells a story. Storytelling.

Your words can be unique and vivid, thus showing something or they can be basic and factual in telling something. And both are needed in your writing.

Confusion should now set in like trying to figure what to do with the opposite end of a hammer.

When you give signs of Jimmy’s animalistic, vein-popping rage, you’re allowing the reader to do some work in figuring out that Jimmy is angry. When you just put it out there, “Jimmy is upset,” you’re telling.

Conflict is the driver of your story. It takes the reader on twists and turns and goes a hundred miles per hour into a hairpin turn.

Here I shall not separate external versus internal conflict. I shall not harp on unnatural conflict, either. Here is where I simply inform you that conflict IS the key to your story. It’s the butter to your bread. The cash to your wallet. The ink to your pen and all other useless clichés of nonsense.

Here is where I do tell you that heinous fuckery in your writing is yeah, hellacool. Guiding your reader into thinking one thing, then twisting it like a Bavarian pretzel where it’s really five, no, six…really it’s seven things rather than only the one thing, but really it’s nine because hahahahahahahahahaha, fuck you in thinking it was just the one thing. Yeah, HEINOUS FUCKERY.

10. You Shall Allow Your Characters To Move Forth The Plot.

Story happenings come about in two ways: Shit either happens outside of the character, or the character makes shit happen.

What I mean about allowing your characters to move the plot forward is to not let your characters squeeze your plot with boney fingers and drag to an early grave. There’s a lot of cause/effect, conflict/response in number ten; however, that’s another post altogether. Here, we shall see action – reaction or result of action.

What your character(s) do as a result of an action is primary in moving things forward. Does Mary react to a mysterious phone call or is there a result of action from the call. Yeah, there’s a difference.

And it tells the reader more about Mary. If Mary does neither, reaction or result of action, then she becomes useless fodder within a story that is not moving forward.