↓ Skip to Main Content
Home › ScatteredNotes › Will My Character Be Dead Without Agency? (And What The Hell Is Character Agency Anyway?)

Will My Character Be Dead Without Agency? (And What The Hell Is Character Agency Anyway?) 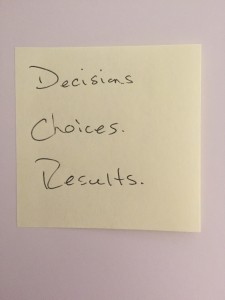 I met with a friend the other night and we got to talking about events in one’s life perhaps changing as a direct result of altering one choice or decision. In essence, and metaphorically, the butterfly effect. Without the complete chaos theory involved.

Yeah, I know, a stretch, but stay with me here.

Choices and decisions and how they are involved in plot and story.

Going somewhere with this.

And that leads to…

Because what your character chooses through her decisions dictates plot and story.

We already know that Agency, in and of itself, is the capacity of a being to act in any given environment.(Oh, you didn’t know. NOW YOU DO.) Or, it’s the ability of your characters to act within a given scenario or plot, which, through those characters, you’ve created. Since characters shape your story, they are essentially responsible for where the story goes.

You thought that was a typo.

It was important enough to repeat.

One more time: Your character drives the story. She’s behind the wheel going one hundred into a hairpin turn. LET HER DRIVE.

You’re merely the sack of sludge, bones, and blood packing the vessel pecking at the keyboard (DO YOUR JOB) and reacting to what your character does through her agency; motivations, actions, reactions, and any push she gives to the plot through her decisions, whether conscious or unconscious. Her behaviors exist, whether voluntary or involuntary within the plot.

Go back and read one of your stories…

Now take chosen story and change the first choice your character made.

If your characters have no agency, they’re like a puppet that you’re controlling. Not one with the strings, one where you ramrod your hand up its tight fabric sphincter.

That’s as exciting as watching a Great White torpedo out of the sea and eat seal pups.

Hang on, that’s actually pretty damn exciting. But it gets boring. Eventually. Trust me on this one.

If your characters have agency, they’ll do and say things to shape the narrative, thus spinning the plot better than a black widow. And multiple characters, because no story has just one character, will create push and pull conflicts through their own decisions and motivations, which ratchets up the intensity, commotion, and intrigue of a plot.