The Constitution + Guns + Religion = Orlando Or Anywhere Else. Anytime. 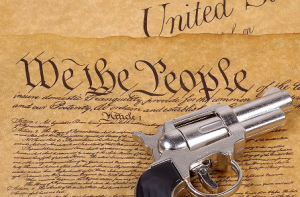 Pick a spot on this Earth.

There’s religion clasping its grabby little hands on the edges and poking its head around every corner.

There’s guns, too. All sizes and types. There barrels at the aim. Triggers erect and ready for explosion.

It’s called “sharing” – thoughts to be exact – so happily sit your ass down and take your half of my goddamn thought. Yes, you’ll wanna sit, because long thought.

Imma just clean the plate: I’m not against guns in a civilized society. I’m not against law-abiding humans owning guns. In fact, yeah, I have a few. I respect the power and magnitude that those firearms possess and I’m fully aware that they don’t shoot themselves. I practice shooting. I have great respect for gun laws and follow accordingly. I understand that it takes a decision on a gun owner’s part to pull the trigger. I’m also fully cognizant of the fact that guns, in the wrong hands, create chaos and become not weapons of protection, but rather a vessel to maim, murder, and torment.

Another thing I’m keenly aware of is the simple, unequivocal fact that religion has killed more people on this planet than any World War or natural disaster. The numbers don’t lie. When guns are in the hands of any religious extremists, it’s not only a recipe for disaster, it’s Orlando, San Bernardino, 9-11, Boston, and any other goddamn mass killing ready to happen.

Let’s be honest, if assault rifles aren’t readily available, people will still die at the hand of trigger-happy terrorists and gun-wielding psychopaths using the name of their very religion as a chant for slaughter. Murders will not stop. Religious vanity will not stop. Extremism will not stop. Terrorism will not stop. Guns will not stop. But the spraying of bullets that penetrate innocent flesh might be tapered. From a shooting perspective, it’s impossible to release multiple shots at once with semi-auto weapons. Sure, many rounds can exit the chamber within seconds by shooters, but not as fast as an AR.

Even double tapping or triple tapping can occur, but nowhere near the 800 rounds per minute of an AR-15. Think about that: 13.3 rounds per second of blood dripping poison wielded by someone hellbent on death mad misery. Not a good mix.

This isn’t a plea for a ban.

Not A Ban, A Conscience.

Someone says that they’re transgender and wish to use the public restroom to which they identify, and goddamn if there isn’t legislation the next day either for or against. Same goes for gay marriage, but a different pan of fry sauce. Sandy Hook, San Bernardino, Orlando, any-next-venue-place-city-or anything to be a target and legislators simply nod their collective heads and say, “Yes, something needs to be done.”

I’m not advocating for the ban of assault rifles, but considering that even a “good” shooter, familiar with quickly loading magazines into their weapon could get through a 1,000 shots in under a 10-minute period, but many factors come into play and few snags can exist, but this—this isn’t about that. The cycle time of the weapon is faster than the speed at which a human can pull the trigger; therefore, it can fire as fast as one can pull the trigger. Until out of ammo.

Gormless politicians will advocate against this as hearsay. Complete blasphemy. Ignorant hypocrisy. G’head. Do it. Then turn self and stare in the mirror-mirror on the wall. You’ll find quickly that you, in fact, are not the fairest of them all.

The Constitution needs to keep up with the changes of everyday society. It needs to be open to the realities that change happens. The problem is, politicians are in the way because they’re stagnant. Like an ostrich, they’d rather put their heads in the sand, but instead of building a nice cozy and comfy nest for people they’re actually hiding because work. It’s damn hard work to get things changed, but with no effort, nothing changes. Ever. Proven fact.

And gun issues in America are like the organic growth of a virus that’s spiraled so out of control that it’ll never be killed. Not even science’s best drugs will squash it. A fucking toxic fungus just waiting to reproduce.

Because today’s politicians are too busy playing tickledick. They pile fuckrelish on everything, hide their agendas so deep in bills that it might as well be floating in space, and cater to…no one.

The Second Amendment is a free-for-all. “Don’t take our guns,” people shout. “I have a right,” others add. They throw in words like God-given, mandated by our forefathers, and other various bullshit. The word God is never mentioned in The Constitution. Anywhere. He/She/It has never granted rights to any person living, dead, floating, ghost-like, or other.

Fucking guns, man. And we, as a country, have certain rights.

Ya know what else I get?

When the Second Amendment was adopted in 1791, people used muskets.

Muskets that used a lead ball that may or may have not traveled 300 yards in a few seconds.

Musket where balls definitely did not travel at a rate of up to 3,000 feet per second.

Muskets that were inefficient killing machines.

The Constitution is just a piece of paper written over two centuries ago and it’s our go-to-catch-all that now never changes.

But fuck yeah, it changed.

It was meant to change. It’s written right in that little fucker. It changed twelve times a few years after its implementation. The last change was in 1992 and of course it had to do with congressional salaries.

From there, we move to religion – the archaic, old-time, never-updated, never-changing, never-accepting, never-apologizing even though it says it does all of those things – a man made belief in something neither seen nor fully understood.

Rough parts of religion are glossed over. Inconvenient parts are ignored. Words are taken out of context to fit the moment. Or adapted into rhetoric, spinning so fast that the listener knows not what to do unless he or she IS told what to do. Self-chosen leaders interpret what they think the book says and “translate” it to the flock. This book, written over hundreds of years and in countless lands then smashed together for the supposed betterment of mankind, is so dusty and stuffy that one needs a chisel, respirator, and thick gloves to clean it.

I just had a conversation with a writer friend who has a book landing soon. In it, she tells a lot about growing up. Fast-forwarding, she tells of her parents and some not-so-great times. We chatted about the thoughts her parents will have after reading it, even though they already know about it. But there’s something very different about the rest of the world being in the know too. Anyway, it’ll be her parents’ perception of events versus her perception and only she knows the full effect of said events on her psyche. In a way, this has correlation to religion. Any religion.

To deny this is a defensive persons idiotic tactic.

Where religion gets twisted is in the peace and tolerance part. When Pastor Roger Jimenez of Sacramento, comes out saying the Orlando shooting was a good thing, that’s neither peace nor tolerance. It is however, dumbfounded ignorance, and proof positive that religious rhetoric is powerful. And kills.

Although every religion encourages the idea of peace and tolerance, almost no one remains in peace or tolerates anything when it comes to their religion. NO ONE.

Kinda defeats the entire non-hostile fabric that any – ANY – religion weaves.

It could be noted, guess it’s gonna be, that even Hitler wrote, “By defending myself against the Jew, I am fighting for the work of the Lord.” And by defending, he meant slaughtering. Perception.

Shit, even the leader of the KKK claims that it is a faith-based, Christian organization. A peaceful people. Perception.

I could read ten Bible versus and gain a completely different understanding than another person, say Pastor Roger Jimenez. He might glean that all non-believers must be lined against a wall and shot dead. I may interpret it to mean that we should love all our neighbors as we love ourselves. Perception.

Back in my youth, I had to read those passages and come to a realization on what they said. Many were the same, like taking a personality test, just written a different way. Many made no sense, but I was told that all made sense and then informed of said meaning.

Let’s reminisce: the Bible was written by many men. Many men who understood things differently. Many men who perceived teachings in a different way. In a way, it’s no different than someone like Jimenez who apparently interprets things from an extremist POV. Shall we say, even, a bigoted fuckwit POV?

Even people who read this may change their perception of me. That is not for me to neither know nor care, because, change is always a good thing. But before you go all bugshit, think for at least a half second and ponder those things that you are TOLD and remember that the brain barfs ideas, just make sure that your ideas are yours and not what you’re told to believe.