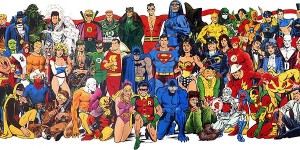 Please no more. At least for a while anyway. Maybe take a year hiatus. Let us catch up.

Not all of us read comics as a kid. Some of us played baseball. Or rode bikes. Or played outside doing general kid things like start fires or catch bugs.

We get the Bat vs Superman. Sure. Makes sense anyway. Wayne Enterprises gets destroyed in the fight between Superman and General Zod.

The whole revenge thing in that you destroyed the family legacy now I must impart my impending Bat revenge.

Got it. All good. The whole checks and balances thing. Righty-oh.

What doesn’t make sense to us that didn’t read the comics is this whole Captain America war against Ironman.

Both are cool and…Totally believable characters.

Let’s be honest. The quality of these movies has been going down faster than the Titanic while the quantity has increased too fast to keep track. And it’s only getting worse. It’s reached market saturation.

And where did the idea go to have just one superhero in a superhero movie? I know, cuuhrazy, right?

It disappeared faster than chocolate cream cake at an all you can eat buffet.

Now these films must have two, three, five, six, or more superheroes just to capture the audience’s attention.

My mind cannot keep up.

It’s a whiz of a whirlwind engulfed in a tornado of epic proportions.

Even Batman v. Superman had to have Wonder Woman… and Aquaman… and Flash.

And the movie was, well, just, meh.

Guardians of the Galaxy will need to be saved by Captain America. But not just Captain, his while damn squad of Avengers will come too. The entire plethora of Iron Man, Hulk, Thor, oh goddammit, there’s way too many to mention. Then they’ll make a call via the red Bat Phone and he too will come zipping in on a wheeled wonder of a rig. And I’m sure Superman will be overhead. Somewhere. Watching and waiting for his call.

It just never ends, BUT IT NEEDS TO. NOW.

Tagged with: Batman vs. Superman