The Desolate Road Is A Motherfucker 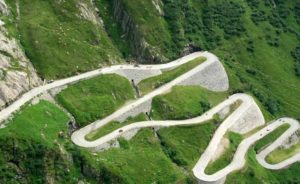 There are hairpin turns that’ll rip you apart from the g-forces, shredding flesh from bone. Your hope – to come out unscathed. A miraculous misgiving of nothingness endured. You make it, only to live for another treacherous run.

Where do you go next?

You whip out pen and paper and write.

Some of it’s shit; some is that of greatness that only you can scribe.

Pfft, even some of the shit develops ideas and what was once shittiness is nary that of greatness, but a thriving new story.

Suddenly you find yourself creating a piece that is eager to fall onto the white page. Blankness is no more. Words pour out; a metric fuckton of hammering keys unfurls; and, you see it happening.

You have characters going this way and that. There’s more tension than a bunch of hyenas and a lonely boar. You ratchet. And release. Tweak conflicts. Move things in favor of other things. You add fear. More conflict. But you’re careful not to overdo it because that’s a no-no. You wind tension tight like one of those little rubber band balls and just about when the little fucker is about ready to burst, you slowly back off. No big O. Release doesn’t happen.

So yeah, your story is coming along nicely and then you have a rational conversation with yourself and find your face in front of a mirror talking back at you, “Hey you! Yeah, you. Listen to this idea: that story ya been crafting… what about we put that sucker into a screenplay, but for TV.”

You respond to yourself because, why not. “You mean a script?”

Of course yourself responds again because, conversation. “Yeah, that.”

And it’s decided by you and you. You’re now deep into several episodes of script writing.

So it shall be. The writers road twists and takes us where-the-hell-ever.

Also actually this is totally normal.