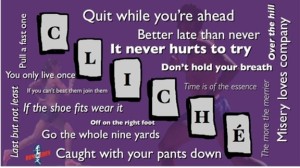 Please, a moment of silence: it was good for a stretch. We had our moment, but we both knew it couldn’t last. I don’t deserve you… you’re too good for me. I need space. You should be with someone who can treat you the way you deserve. I think we’d be better as friends. I’m not ready for something like this right now. Look, it’s not you . . . it’s me.

And here lies the dreaded cliché. It’s dead. I shot it with my powerful, overlord pistol that is used for all things weary, threatening, and unworthy. It’s gone. Dead has a strange way of not allowing things to come back. Ever. Forever. Never.

Hold the phone. Before you get all bent out of shape and lose your lunch over this and realize that love is blind, remember, sometimes, it’s the luck of the draw that really gets my goat. I mean, shit, it has to end sometime. I should go fly a kite. When it’s all said and done, at the end of the day, if you don’t like it, hit the bricks.

Let’s ask ourselves, wait, should we all get in a circle and hold hands first?

Circle be damned then.

Let’s take a quick look at cliché’s in writing. I’m not talking about those like writing about a kid detective, or a dream scene where the protagonist realizes that he was chosen to be a superhero, or some other totally believable bullshit like that

I’ll answer that for all of us. FUCK NO. Remove that crappy-ass cliché or you’ll get a punch in the face.

Does It Add Anything To My Piece?

Again, allow me. FUCK NO. Please see previously referenced punch in the face.

Am I Just Using It As filler?

Well, if you’re asking, sure, I can answer that too. FUCK YES. Unfortunately, many new writers are sold on stupid little things like word count, sentence length, and paragraph size. They mistake those for structure, content, and quality. DON’T. DO. THIS. EVER.

The cliché is banal, hackney nonsense. Good writers avoid this like the plague (oops). Great writers steer clear to avoid the wreckage. Let’s face it; cliché’s in writing are about as fun to read as (insert your unimaginative cliché here, or…) the manual for your shiny, new toilet plunger. Wait a second, come to think of… ohhhhh, never mind.

The cliché will kill, no, destroy and incinerate, any well-written piece. Sure, you could throw one in with dialogue, but why bother. Be creative. After all, that’s what drives fiction, the entire creative process.

That being said, there is a cliché I’ve been working on that I think could just be the next big thing colloquial clichéism: “Slam that mutherfucker like a tuna can.” Yeah, you’re right. Okay. I’ll let it go.

World Premiere Event Exclusive And Any Other Eye-catching Words That Make Your Mind Buzzzzzzzzz.

Long awaited INTERVIEW with writer extraordinaire, M.S. Kaye will be on TUESDAY, September 4th. It’s not the third and it’s not the fifth. It’s on the fourth. THE FOURTH. Sure, you could visit my site on the fifth and read about it, but by then it will have been all over, so…

Who: M.S. Kaye of @MSKosciuszko on The Twitter
What: Interview
Where: Here
When: 9/4
Why: Just why the hell not? Man you ask a lot of questions!