Where I Get Real For One Goddamn Second… Just One

Some of my thoughts on Charlie Hebdo and terrorist scum. 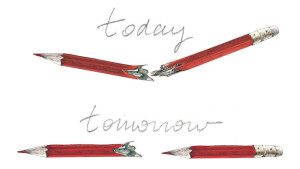 Go here to get the story of the artists behind the now iconic pencil tribute.

Next time you twist and weave then quilt together words into sentences and your thoughts wander and you mutter to yourself, “Nope. Can’t write that. It’s way too controversial. What’ll people think?” think of the staff at Charlie Hebdo.

I mean really think about them.

They gave a collective middle finger to the thought. They took their pens and pencils and shoved them so far up the asses of extremists that those extremists went nutso.

Correction: more nutso-irate-cocopants than crazy normal. So irate that they forgot that their mission was to self-destruct after they selfishly murdered innocents. Instead they ran like cowardice roaches in search of a good hole to hide.

The editor, Stephane Charbonnier, in 2012 tells French reporters, “I am not afraid of retaliation,” he goes on to proclaim, “…I prefer to die standing than living on my knees.”

He was prepared to die for what he believed in, free speech and freedom of the press. In simple form, WORDS. He had a bodyguard for fucksake. A BODYGUARD.

What we need to realize is that those shit eaters come in all forms, races, religions, and nationalities. It’s not a singular people. It’s not one nation. It’s not a single country. It’s many forms of bullshitism.

All Religion kills. Always has. Always will

Writers need to trust their work just as Stephane Charbonnier believed in his work. We need to be strong in our justification and determination of the written word. Conviction doesn’t mix with contrition. I’m certain Stephane didn’t think so either.

Let’s take a moment to set aside our pens, pencils, and keyboards for a moment of silence to remember all killed in this massacre.

Know this, when a pencil breaks in the literary world, another gets sharpened. Words fly harder.

Go here to get the story of the artists behind the now iconic pencil tribute.