↓ Skip to Main Content
Home › ScatteredNotes › Get The Tell Out. Suck Less.

Get The Tell Out. Suck Less. 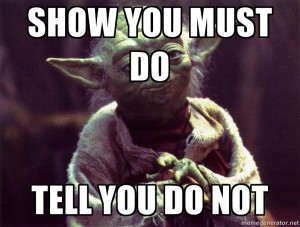 You’ve heard it. Betcha you’ve said it too.

Have you ever read a more telling sentence in your life?

Let’s dissect this integral phrase bandied about like literary shrapnel in creative writing.

The basics: don’t explain your story. The reader doesn’t want a narrative explaining the story. They want to be engaged. They want to read something that moves from scene to scene without the choppiness of a Ginsu. Don’t use telling words to the reader.

Because I’m in your head, dreams, backyard looking into your windows, house…whatever, I know your next question: “How?”

Great questions only deserve greater answers. Here’s a list of eight ways to avoid telling fiction writing. In other words, get the suckiness out of your prose.

Dialogue is the easiest way to keep your story moving. It’s active. It will add the sense of showing that you are attempting to get across to your reader. It adds to characterization. It emotes. It accentuates the mood. Dialogue might be the best damn thing ever. *sniffles and wipes away tears*

2. Get Your Reader To Smell Shit.

DO NOT TAKE THIS IN THE LITERAL SENSE. Showing up at a reader’s front door with a brown bag of feces is not acceptable. Unless…

Engage the readers’ senses. Get all six, err, five involved. Some might have six.

Focus on some of the underused senses. Sure, it’s easy to get the big three involved, but how about smell and taste.

Dead skunk. Rotten meat. Chunky Vomit. Sweet onion soup. Sure, all can be a visual sense, but stop and think about the various smells each gives. They evoke the sense of smell without using descriptors of smell or scent.

Do not overuse description. Too many adjectives can clutter your writing and sloooooooww ittttttt dooooooowwn. See what I did there with the… Okay, think about a living room end table. Describe it. I’ll help to speed this up.

“The deep brown wood had striations throughout the grain. Each leg had a symmetrical groove from top to bottom. The stained finish showed hues of dark orange in the bright light.”

That—that’s way too much. Don’t do that. Keep it simple. Keep it easy. You’re not writing an eighteenth century novel. “Deep brown” describes the table just fine. The other stuff is just fluff and filler. It’s unneeded. Unwanted. Overkill.

This is not to say that you should never use an adverb. Be sparing, like one in every 10,000 words, if needed.

It’s said that using an adverb means that you’ve just used s shitty verb. Don’t be piss poor in verb usage. Adverbs tell a lot, but telling is the one thing you need to avoid. An adverb can always be expanded to show action.

“He ran lazily,” goes to “His legs and arms moved in slow motion.” Hell, I’m sure you can do much better, but you get the point.

Also, never use an adverb to modify the verb “said” –  … he said whimsically. This chops your prose and makes it complete shit. People WILL laugh at you.

When in doubt, remember these quotes by some famous writer types:

“The road to hell is paved with adverbs.” – Stephen King

The occasional, and by occasional I mean NEVER CLICHÉ metaphors, will help move the writing along. Read the following sentence very slowly: the use of clichés in writing WILL kill your prose.

Consequentially, readers WILL want to kill you too.

Metaphors are a good way to avoid telling in a story, but if you cross the holy realm into cliché, you will be outcast. Shunned from the quill pen society. Dragged through a desert of thorny hell. If, for example, you use “in the blink of an eye,” I will drive to your house and remove your blinking eye with a rusty pliers. The pointy kind. Dipped in muriatic acid.

“He could see the anguish in her face.” Bad. It’s an empty sentence.

Show the anguish. What’s it look like? Is her face twisted? Is one eyebrow raised? Both? Does she even have eyebrows? Is she flushed?

Your characters can also convey  emotional states through action and dialogue. Because, both of those are…

*waiting on someone to yell out the answer*

Be specific rather than vague. When you use telling in your writing, you rely on generalizations. Being specific makes your writing more accessible. It engages the reader more.

8. Goddammit, Know When Enough Is Enough.

“Show, don’t tell” is not a license to overwrite. If you overwrite, your editor will get mad. When your editor gets mad, it creates more work for you.

There’s a narrow line of showing and telling and good writing mixes both. We’ve all read great narrative that tells a little and shows a lot. It’s like scotch and a glass, the perfect mix

If your writing only shows, it has a tendency to be over the top and that will detract from the story. Be careful.

Your goal as a writer is to engage your reader with interesting prose. Keep it fresh. Keep it simple. Keep it clean. Learn the “keeps.”

LAST NOTE: Exclamation points – You are allowed no more than two or three per 100,000 words of prose. Simple rule: run a search for all the exclamation points in your writing and then change them to a period instead. You’re welcome.

Tagged with: Showing in writing

2 comments on “Get The Tell Out. Suck Less.”