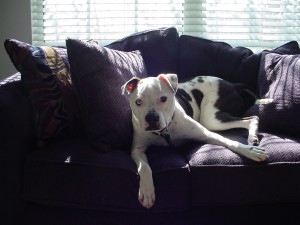 The early days and at his comfiest.

A writer writes, but sometimes we take a break to remember those things that we hold dear, like dogs.

I shall not extol the marvelous talents of my pitbull.

Okay, it’s not like he was classically trained to play the piano or whatever, but maybe he was.

I got him at a time when I needed something. I needed a change. Not sure of what, but something. Then I saw it.

That blue eye shown out in his picture. It called to me. It was the magical sapphire that grabbed my heart: Brody, the blue-eye bandit.

I took care of him, but more so, he took care of me. Gave me a purpose, a reason to have cause. Because of him I volunteered at a pitbull rescue; helped train pitbulls; and, will always be their advocate. Like I said, PURPOSE.

And that included helping when he needed it most.

I thought I was ready. I prepared mentally. Be tough as chiseled stone, I thought – hard, emotionless, don’t crack.

I bawled like a hungry baby. Tears still stream while writing this.

I have a friend who went through this a year ago. It was a difficult decision and she opted to be in with her little pooch to comfort him. I went too. She was strong. I am not; therefore, I will not attend the peaceful sleep. I prefer to remember my dog in a different way.

With pets, we have to when it’s time to say goodbye. When do we let go? The answer isn’t ever easy. The Internet does’t show us, Google can’t help. The dog can’t tell us his level of pain or struggle. We have to  observe; listen for signs; see if there’s a change in appetite; pay attention in full detail.

Almost three years ago he was diagnosed with severe arthritis in his hips so I figured about another year. Anything after that would be bonus time. For a dog that played like a triathlete, bad hips were debilitating. He liked the bike…to pull it as fast as he could. He tore up the field at the dog park. The Usain Bolt of dog fiefdom. Slower dogs wanted to be him. Faster dogs couldn’t catch him. 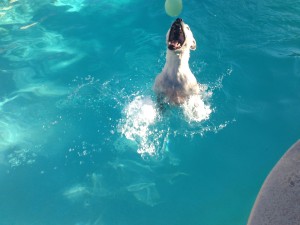 But for a dog with power, speed, and agility, he did the most important thing: he was obedient. He listened. He followed commands. He was a model for his breed. He studied diligently for the Canine Good Citizen program.

And therefore, I prefer to remember the good and some of the bad, for it was the “bad” that made him, well, him. The him I will always remember.

There was the time he almost ate himself to death by opening his food container and wedging his enormous skull inside until his tongue could no longer reach food. Frenzy over, he managed to scarf almost twelve cups of dry food AND get his head stuck. Fun night cleaning up mounds and piles of vomit. Yet, he came through like a trooper.

I remember a hike back in 2007. We were walking along an ice-frozen lake in Michigan when I slipped on the muddy embankment and he suddenly found himself sliding on the lake. Alone. 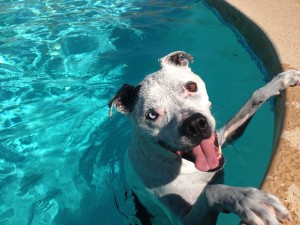 Just hangin’ ’round in the pool. Literally.

Being him, he took advantage and chased after the first rabbit scurrying for a hiding spot. The rabbit never really had a chance until, crack, the ice broke. Brody hung to the side and I remember one word escaping my lips, “Fuck!” I knew the water was waist deep for me, but freezing to a dog and, well, deep. And scary.

I scuttled out, grabbed the scruff of his neck, and heaved. Wet dog over my shoulder, we hurried back to the car for towels, blankets, and high heat. Regulation of body temps in check, I think he was disappointed that we had to cut the hike short. But, he made it.

He should have bit the dust after speed pounding a bag of coffee beans. Including the bag because, well, apparently the beans just didn’t fill him up. And caffeine and canines don’t mix. He made it through.

After we moved to Arizona, he became Houdini at escaping his dog run. He would strategically climb the only spot that was no-climb fence and chill by the pool. In the 112 degree Phoenix summer sun! With only one tree for shade! And a pool full of chlorinated water for relief! He survived.

Guess what I’m saying is that perhaps my beloved Pitbull was maybe a cat with the whole lives thing. 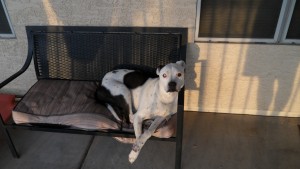 His favorite spot to chill.

The arthritic hips didn’t take him down. Slowed him, sure, but he refused to not do his thing. He still swam better than Phelps. He still went on walks…kinda anyway. There was that one time he had to be carried two blocks home because he had no more go to give. That’s a seventy-pound sack that’s, come to find out, very fussy about how he’s carried. He preferred to face front, legs straight out. Hey, he wanted a view. 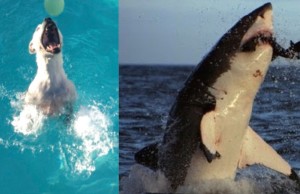 This! This is how I shall remember my Brody. Because no matter, he’s way better than some jumping shark.

But after all this, it was an unsuspecting “growth” in the larynx that made it difficult for him to breath.

If his facial expressions, side eye looks, face-diving into the carpet, or trying to be a seventy pound lap dog didn’t get you, that solitary blue eye did the trick. It had powers to chase away the blues.

Sometimes I’d catch it staring at me, watching. I couldn’t help but smile and be in a good mood.

He understood the “leave it” command, but sometimes the wafting smells of food sitting on the kitchen counter called to him. They were too much a temptation for him to overcome. It was a battle of self-control versus wanting to be obedient. At times, his dog urge took over and my breakfast would be gone in three point six seconds. Yes, record time. Other times he would be completely still until told to eat a treat sitting on his paw. Oh, the fine contradiction. To this day I guard my plate like a prison inmate.

However, (yes, there’s always one of those damn “howevers” thrown in to fuck things up) I’t’s said that all good things come to an end, but when it comes to the lives of our pets, we have to ensure that the end, for them, is a good thing, too. As humans, it’s a difficult decision to make. We don’t want the animal to suffer and we know we can’t be selfish and hang on too long. It must be a non-suffering, humane, and gentle path. They gave us the gift of being them, we need to be sure we give them that gift back. 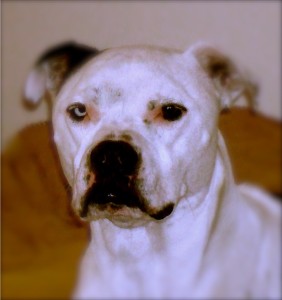