↓ Skip to Main Content
Home › Just for the fuck of it › Inkslingers & Java: Misconceptions, Truths Or Whatever

Inkslingers & Java: Misconceptions, Truths Or Whatever

Christopher Winterberg Posted in Just for the fuck of it, ScatteredNotes — No Comments ↓

Are we gonna pretend this isn’t happening? You know, The Epidemic.

We would have to go all the way back to the mid sixteen hundreds to find the first literary reference to coffee being consumed in America, but this is in fact, NOT a history report on the chronicles of coffee in the US.

Was it the first batch of Colombian beans hand-picked by Juan Valdez? Is it the omnipresence of a certain coffee retailer on every block in America? Is it simply that every writer wishes desperately to be a cartoon cliché?

Is it the big cushy chairs? It is, isn’t it?

You saunter to the counter with your tattered messenger bag full of the essentials; pass judgment on all the others in the place with a cordial, yet contemptuous stare; and, order your seven different kinds of whatever made by a barista/singer/actor/actress/ninja/college student.

So, why do literary linguists, scrawlers of scribble, and writerly wonders enjoy setting up office at the nearest corner coffee shop? I could end it right here and just say, “I don’t know.” But, I have infiltrated the ranks and the secret shall be revealed. Hint: unicorns are not involved. Nor are revolutionary bears wearing wolf head hats. That’d be pretty cool though. 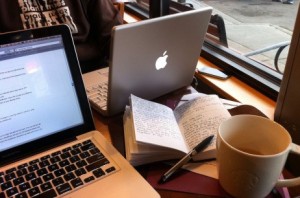 I never went to science school, but my theory, tested visually, is this: peeps generally have a fear of not having a purpose. They procrastinate. If those same people go to a public place, voilà – writing gets written – purpose fulfilled. Done. Bam. The scribe feels engaged on a social level, when in reality, the scribe cannot be social for fear of no writing being written. Ever.

On one hand, the writer wants solitude, silence, errr, perhaps a little background noise. Ambient sounds, if you will. It’s light, but not distracting. Maybe it soothes. Maybe it has a catchy beat. Maybe it allows said writer to find the ever-sought-after Inner-Self-Of-Writing-Wellbeing.

Some say that coffee allows them to feel themselves.

WTF? Feel yourself? In a coffee shop?

Oh, “feel like themselves.” Got it. Makes way more sense.

Coffee is a widely abused substance throughout the writing culture. I’ve seen it! It’s everywhere, easy to obtain, and sometimes, even free. It’s the legal, mind-altering substance writers use to complete their work. It makes people excessively giddy. It’s a menace.

Coffee comes from all parts of the world, but let’s be real, Columbians grow and export it in an attempt to make the world think that they are not the world’s leading cocaine exporter. But, we know. We. Know.

Coffee keeps the workforce churning. It keeps writers writing. It is the elixir of life.

Maybe you sit, sipping your latte, in that comfy chair, arms on the armrests, just people-watching.

So, you’re voyeuristic and hey, who doesn’t like to people-watch? Side note: the word, voyeuristic, in and of itself doesn’t necessarily make one creepy; however, there is a very fine line. If you own a large, regular sized van, and you have, let’s say, sat and watched people in said van, then yeah, you’re probably really, very, extremely fuckin’ creepy.

The aforementioned epidemic is responsible for, and I cannot prove it, many things in history. Don’t you know how Edgar Allan Poe died? From drinking too much coffee? The fall of the Roman Empire? Coffee. The building of the Trojan Horse? Done because of coffee. Great Wall of China? Yup, coffee.

The coffee shop helps the writer get rid of coffee face. Then coffee shop productivity sets in and it encourages coffedence. It spirals. It wears off. Doom sets in.

Histrionic? Maybe, but probably not. No.

I can’t do it. I get twitchy. Lose focus. I look around. At everyone. I’m misanthropic. Okay, not completely, but somewhat. I think it’s a good thing.

I dunno, maybe people don’t like me. Maybe I don’t care. Either way, that shit’s intriguing – the coffee shop enigma.