So, where to begin with this character. I don’t mean character in a derogatory sense. I mean it in a, ahhh, fuck it, here goes: Jake Friedman is a Linguistic Overlord. Many times I find myself searching for the nearest dictionary while in his presence. That’s a seriously  good thing! He leads a writing group which I may or may not necessarily frequent. 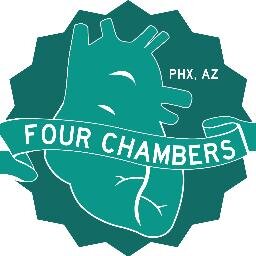 1. Who the hell do you think you are? In other words, tell us about yourself. We wanna know.

Oh god, haha, I don’t even know anymore. Just kidding. Not really. Hi my name’s Jake Friedman, I graduated from a small liberal arts college on the East Coast with degrees in English and Philosophy before I moved to Phoenix in August 2011 with my friends Matt and Danni because Danni was doing a Master’s in Music Therapy at ASU, I hated where I lived, I wasn’t doing anything, my other best friend was in the Phillipines and I figured, well, why not. When I write it’s usually a lot of poetry. Sometimes creative non-fiction. For money I wait tables. For fun I don’t have it. I also may or may not have anxiety and other things. Who knows.

Four Chambers is a space for literary community in Phoenix, Arizona. Also, it’s named after the heart.

3. Where’d You Get The Idea To Start A Literary Magazine In The Heart Of The Desert?
Hahaha, well, uhm, to be honest with you I didn’t even want to start a magazine, I kind of still don’t, I’m young, I’m easily stressed out, it’s an unbelievable amount of work sometimes, if there was a magazine here that I could have started working for/with I totally would have, but the fact is that there weren’t, there are a small handful of zines and university affiliated journals but essentially nothing independent or mid-level like what we’re trying to do here, somebody has to do it, and I figured, well, why not me. I just can’t see myself doing anything else with my life. This is sort of it for me.

4. What Was The Most Difficult Part of Starting Four Chambers Press?

Finding people who were interested and passionate enough to help me start this thing. Learning how to delegate and not do everything myself. Trusting others. Being patient. Creating timelines. Other grown-up things.

5. How Does Your Literary Magazine Differ From Other Magazines?
Hahahaha, I’m not sure we do.

I think one of the things that sets us apart is that while a lot of other magazines get their work from the community, we are legitimately publishing work to build community. So while our business is publishing, it’s simply what we do, our hearts (yukyukyuk) lie in sponsoring programs and activities that help people develop as writers, create meaningful public art, and give back to the community. The other thing I think is that we’re approaching this as a business. And while this isn’t to say other magazines aren’t, we’re going to write press releases, we’re going to have swag and merchandise, we’re really trying to put ourselves out there in the community and establish a presence, and we’re going to be selling these things, hard.

6. How Does Four Chambers Press Receive Its Funding?

Sales. As far as the business side of things go our budget is relatively low, our major cost is printing, and we’re going to create a sustainable business by selling magazines.

7. What Makes Four Chambers Press Different From Harpers Magazine, The Paris Review, or The Atlantic?

We’re not as good as them? Hahaha. Honestly I’m a very busy person, I wish had the time or mindset to read more literary magazines and I’m not terribly familiar with a lot of the old guard, but I think us being so much smaller (not to mention newer) allows us to be more personal, open, and flexible, and ultimately allows us to publish more interesting kinds of work you just can’t get in such a mainstream publication. We can publish things that are weirder, more unique, and we can take greater risks.

8. Why Should We buy a Copy of your Magazine?

Because you like me? Because the work is interesting, memorable, and good. And even if some of it isn’t your cup of tea, purchasing an issue of Four Chambers directly supports local writers here in Phoenix, AZ (and beyond) by giving them a place to publish work.

9. What Services Does Four Chambers Press Offer To Writers – Any Baking Advice?

Down the road I think we want to offer some kind of editing services (we have a pretty legit editorial board, it only makes sense), I’d like us to be able to offer some kind of marketing and promotional services as well (if not publication), but right now our goals are fairly modest, we’re not trying to publish the next New York Times Bestseller or advance literature into the 21st century, we’re just trying to focus on creating a space for writers to get their work out there and start building a platform. Then we can take over the world.

Oh god, that means so many things to so many people. I know it when I see it? I think good writing is basically having something to say and being able to say it well, honestly in your own voice, and I particularly like it when those things can help people understand and even come to terms with contemporary American society/life. I want to see what it’s like in another person’s head, what their consciousness is like. I’m a strong proponent of realism, too, but I think it’s important to recognize that reality is fluid, that imagination, fragmentation, absurdity etc are parts of this reality, and that sometimes there is nothing less real than the real. I’m really into taking figurative language literally, lately, too. So like I think it’s really awesome if ‘my friend’ feels like he’s being seduced by a cookie and writes a piece from the perspective of the cookie that is actually seducing him, or if ‘my friend feels like he is a complicated personal relationship with a city and writes a pieces where he is legitimately in a complicated personal relationship with a city. That’s uproarious to me.

Short Questions With Even Shorter Answers:

What book are you reading now?

Space is the Place: The Life and Times of Sun Ra by this guy named Szwed. It’s for a longer project that may or may not happen, I can’t do things without an excuse.

Have you ever spilled coffee on your writing and cried about it?

I try to spill coffee on my writing. It makes me feel like a real writer. I think it’s legitimizing.

Are you jealous of other writers?

Can you share a little of your current work with us?

I was working on a piece today called “The Waiter Explains Short Term Memory” about remembering orders and how people think that’s neat but I’m struggling, it’s too rough. There’s a piece called “Looking at Pictures of Fukushima Fruit”  I like that has a nice opening:

No heirloom produce these

in fetu, these haywire roots, grown in no victory

garden, sold in no grocery store, enriched with more

than vitamins and minerals, who cares

so bad, they’re so fucking gross, we try to choke them down but

we’re throwing them back up”

Another one called “Elegy for Alexander Bell”  that might become part of a larger piece that is still in the works  and goes:

There is always something lost in long distance, a rift

calls can never overcome, there are so many

missed signals, so much interference, it’s so awkward to talk

without body or hands, so hard to hear you

through string and tin can, there’s no life

It feels so good just to touch

another person, just to be touched, to lay

entangled in your lover’s arms, that lingering

tingle of a fingertip’s graze, your

the flesh’s gentle weight, to

express this tendency, this mystery

of objects, these bodies

at rest, the simple effects

of each other’s presence, to

together, cleave, to feel you

at a distance, ripple

in your wake, orbit

in your space, to know that

wherever you are in the cosmos, no matter

how long it may take, we are irresistable to each other,

But I’ve been struggling a lot with brevity and concision lately, it becomes especially hard when you find yourself falling into lyricism and meter, it gets a little rough, my journals are filled with shit but I try to remember that I’m not doing this to publish things or even finish them, I’m just doing it because it makes happy, because it’s just what I do. You know how it goes.

Reach out to Jake at fourchamberspress@gmail.com and fourchamberspress.com . His editing specialties include, in terms of form: literary fiction, non-fiction, and poetry. His genres include: traditional, modern, and postmodern narratives; flash fiction; personal essay and memoir; free verse. His editing includes: large and small structure (e.g. from plots, character development, organization flow and overall sources of meaning to imaging, managing time, and individual sentences). He says, “The most important thing is finding somebody who likes your work (or at least understands it).” I agree!