↓ Skip to Main Content
Home › Just for the fuck of it › Politics Versus Fiction And Why The Pres Is Like A Writer, But Not

Politics Versus Fiction And Why The Pres Is Like A Writer, But Not

Christopher Winterberg Posted in Just for the fuck of it, ScatteredNotes — 1 Comment ↓ 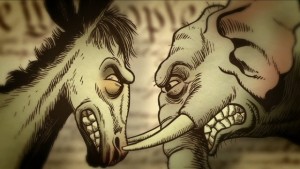 Fiction holds tight between the two.

Politics are like a coronal mass ejection from the sun – no one wants it.

It’s a seed that sometimes grows and blossoms, while other times it fails and remains stagnant while hiding in the ground never to prosper. And the jargon is complete and utter fuckrelish.

No one, and I mean no one (no official stats or surveys exist, so I’m just guessing) as ever said, “Politics, shit the fuck yeah!”

Stay with me here, and pay attention. This is gonna go fast.

With the four hundred republican candidates running for President, I got to thinking.

Go ahead, crack jokes. I THINK…sometimes. And I’ve come up with ten reasons why fiction writing is like politics. Or vice versa. Or whatever.

I’ll just get the obvious over first: fiction writing and politics have one single premise – BULLSHIT. Bullshit. And more bullshit piled upon said bullshit.

The writer makes up a beginning, middle, and an ending that attracts and entertains. Politicians do the same in playing make believe to the very end. Some know a little, most know nothing.

It takes a lot to create a story. It takes more to carry that story through to a solid ending. Writers are a funny bunch and by funny, I mean pure genius of course. Pfft, goes without saying.

Politicians, err, well, kinda the same way. It’s take a creative and uhhh, diabolical mind to run for President. And by diabolical I do mean curazzzzeee. Or genius. Pretty much the same.

C’mon man, both are filled with lies, lies, and more lies. That’s fiction, in a strange way. Politics, well, uhhh, in a word, lies.

Both point to one or two conflicts that may or may not get resolved. For the writer, it results in another book…or more. For the politician, it results in ratings, acceptance, maybe being recalled, or never running again.

5. You can tell stories and then not have to back those stories with any facts.

Sure, some fiction has the aspect of research or getting shit straight; however, it’s still a story with little or no facts. The same could be said for politics: tell a story, maybe throw out a probable fact…or not.

6. You make shit up on the fly and just throw out statistics and people believe it.

Seventy-two percent of all stats are made up.

Maybe? I dunno. Politicians are famous for throwing shit out with little or no proof. “We have forty percent more troops on the ground in wherever the fuck.”

The fiction writer makes stuff up too; however, the story dictates what we make up. Need a murder, done. Need a sex scandal, done. Need a war, done.

7. You develop make believe, but in a way, a real life scenario of what will or will not work.

Ahh, the writer’s forte. Make it up, but make it real. Make it believable. Make someone sit back and say, “Uh-huh, I can see that happening.”

Republicans, Democrats, Tweeners, they all do it. They create a real-life scenario of the whatevers and play it through to see if it works. If it doesn’t, then they tweak or maybe include a Middle Eastern country to work it out.

I sit at my Mac and write things all the time. I pause, sit back and think, “Sure. Seems plausible. Could happen. Yup, in fact, that fuckery works.”

I ask, is the political game much different? Methinks, nah.

9. Spit shit out and hit the return button hoping not to repeat said same shit.

Speaks for itself. Writers make words happen; those words make sentences; all jumbled together we get paragraphs. And, just maybe, if we do it right, it all works out and we haven’t repeated anything. Politicians hope for the same, but many times they fall into the trap of not knowing—knowing what they’re doing so they become redundant.

In writing, redundancy is a muthafucker wielding a sharp blade that you need to sidestep fast. Politics, they try, but usually miss the sidestep thing and get caught. Then…well, see number three.

If it doesn’t move the story, leave it out. Always. Politics is good at this. Especially good. In fact, excellent. Not only do politicians leave shit out, they consider the word vague to be their best value. It’s the fallback. The very particular thing they are exceptional at doing. Always.

Not everyone likes what the President will do just like not all peeps will like what a writer writes. Both need broad shoulders and alligator skin. And, both need to be like a great white shark and keep moving forward for survival.

Uhhh, did he just…

YES THE FUCK I DID. A miraculous happening. I used two separate apex predators in a simile. Suck that one!

I have decided to run for President. Yes, I am officially announcing my candidacy. The Donald and Hilary are hereby put on notice.

Tagged with: Fiction and politics, The Donald