Christopher Winterberg Posted in Just for the fuck of it, ScatteredNotes — No Comments ↓ 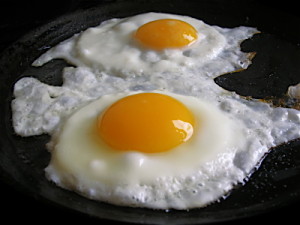 If you love eggs, this is your bag right here. If you’re looking for a writing gem of useless information, that’ll be back in due time.

I know what you’re asking, “But Chris, what fresh hell is this?”

It’s about eggs, so the freshest.

You say, “I eat oatmeal for breakfast.”

You will eat what you are given to eat. Here it’s eggs.

Those two are the last steps really, but…

I decided to write this because I have a friend – okay, I’d call him an acquaintance. Fine, I figured he’d be dead by now. Anyway, he mentioned that he didn’t know how to make a fried egg. This is for him.

A stopwatch was used during this process so, scientific.

If you’re a chef de cuisine and are thinking, “This—this is all wrong.”

I instruct you to leave. Now.

I have taken my limited culinary skills and condensed the steps for those new to art of edible delights on the top of a hot stovecave. Also, those who have difficulties working with live flames.

An eight-inched pan with non-stick works wonders. Medium heat works best but it’ll depend on your advanced cookery device. The pan should have a short lip or for those with limited cookery vocab, that’s a side. Also, good soft angles are a plus; pan with curves (see second photo).

2. Slather It All Over

Spray is the best solution here, but olive oil works too.

Allow the metal to heat for a few minutes. For you, we’ll say two.

3. Be Delicate In Your Maneuver

I just realized that the first three steps are, well, sexual.

You’re opening two former chicken embryos, and unless your either Fred and Barney or Wilma and Betty…not a pterodactyl egg. We don’t want any shell fragments in our delicious goodness.

4. Drop Some Stuff While It’s Wet

For the love of food, this is way too sexual.

This is where you sprinkle with your favorites of salt, pepper, marijuana, whatever makes you happy. I prefer pepper, but sometimes red pepper flakes add zip.

*shakes head at you because, scotch in eggs*

I was just seeing if you were paying attention. If scotch made it into your eggs, then, well, you’re not. Or, alcoholic. Maybe both.

Besides, everyone knows that scotch goes in the coffee, DUH.

You could add a little shredded cheese for the Midwesterner in all of us.

There’ll be some cracklin’ goin on.

Bubble, bubble toil and trouble are your key. Let those suckers bubble just a little on the pan skillet side. The yolks should jiggle a bit. 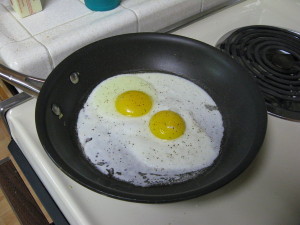 Even I admit that was weak.

This is where you flip.

If you’re good, use the pan and a quick wrist.

I’ll assume you’re not though and you’ll need a spatula.

FOR THE LOVE OF EGGS, BE CAREFUL.

Slide your spatula underneath the eggs and flip them over. Again, CAREFUL.

8. Yolk Down, White Up That’s The Way We Like To…Have Our Fried Eggs

Now that you’ve successfully achieved ROCK STAR status and have those little suckers where you want them, be patient, but not too patient.

Patience is for losers.

You can’t handle the patience…

Back to the eggs.

Wait for about two’ish minutes. Then flip the eggs back to yolk-side up.

9. When In Doubt, Slide It Out

Be gentle in your release…

Slide the eggs on a plate or on top of your desired toast of choice. Or an English muffin. Or a bagel. Or hash browns.

well, you get the point.