↓ Skip to Main Content
Home › ScatteredNotes › The COVID-19 or as I’m calling it, THE TOILET PAPER SHORTAGE OF 2020 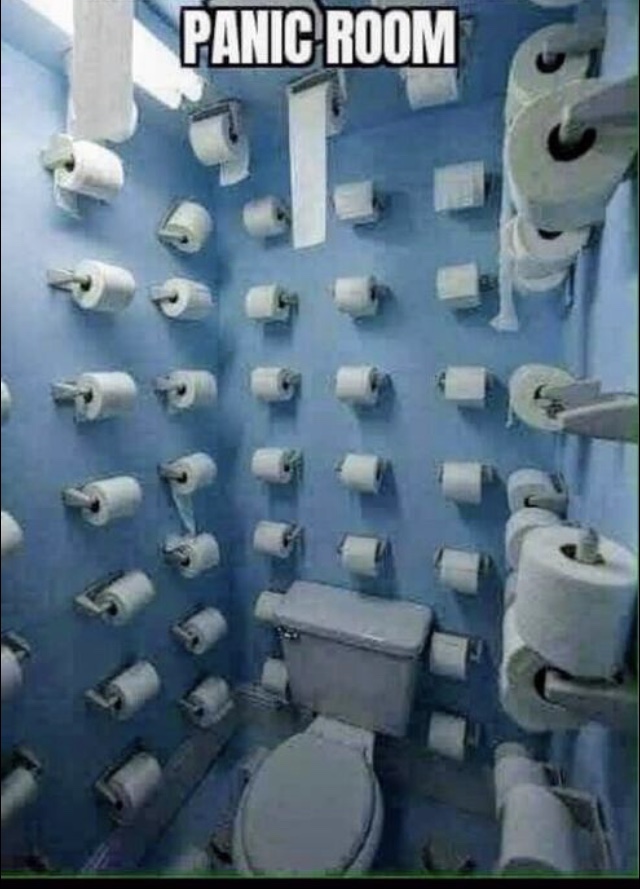 I write this wondering what‘ll happen if there’s a real apocalypse. First, we‘ve come to know how Americans really feel about toilet paper so that’ll disappear faster than free cake. Second, we know anything toilet paper related-adjacent-in-the-vicinity, will disappear. And third, yes, ALL toilet paper will be gone.

I don’t recall seeing any pre or post apocalypse movies where hoarding toilet paper was a thing. Ever.

I see pictures of Costco carts full of food. Do you have any idea how hard it is to fill a Costco shopping cart?

*tries to figure equivalent quotient of toilet paper to groceries purchased. says fuck it because math is hard*

I should explain. There’s a backstory here. Once upon a time in the very recent past I was given a task: pick up toilet paper.

I laughed. Sure. No problem. I’m on it. Not too difficult. Pfft, whatever.

I had no idea that during CORONAPOCALYPSE the first thing panicky humans would hoard would be…
Toilet paper.
Toilet paper?
For a respiratory virus.
Toilet. Paper.

No-no. It’s my bad. I absolutely got it wrong.

I developed a strategic plan.

It was early. So early, the darkness was comfortable and I was still blurry-eyed. I wiped the sleep sand from my eyes.

I ambled through a store where carts were pushed like guided missiles. Tunnel-visioning shoppers were on a mission. Like an army of ants, they scurried one after the other, carts to assess, straight for the paper goods aisle. My pulse quickened. I waited to cross a main artery from kids clothes to paper goods. My super-secret shortcut didn’t work. After I Froggered across, I too found emptiness. Like a vault wiped after a robbery, fingerprints didn’t even remain. Mother Hubbard’s cupboard was bare. Bone white shelves shined under high fluorescent lights. Not a single roll. Panic-buying empty.
I thought about laying a fifty to make a backroom deal with a stock person to text me when the next shipment arrived. I turned to the has-any-and-everything-of-consumer-goods god, Amazon.
Nothing. Out. Damn.
Confusion set in. I dreamed of being back in bed and hiding under a heavy blanket. I zombied through the store grabbing some needed food stuffs. And then, well, it happened.

The gall of someone to sneeze. I was more than a social distance away. I stared. It quickly turned to a glare. Eye darts. My misanthropic self kicked in.

Why is that person breathing? Cart abandoned.

Now it’s time for Netflix, panic-eating donuts, and pandering Amazon for unneeded shit. While you’re there, I mean, it can’t hurt, so go here for a good read during your 14-days of solitude.

Remember, Social-Distancing can be another meaning for introverted misanthrope. Also, I’ve decided to sit this apocalypse out for now and not wrestle any panic shoppers.