The Description Is In The Details And Serial Stuff 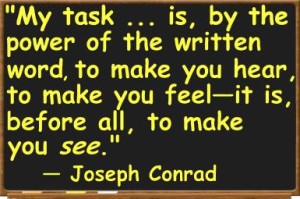 Hey peeps, I’ve been called out. Yes, me, yours truly.

Another writer friend informed me that he has not seen a blog post from this very spot in, errrr, a long fucking while.

I’d like to lie to you and say my hands were broken. Or my dog ate my Mac. Or even that my house burned and all things went with it. But alas, we don’t know each other well enough to start lying to one another…yet.

When informed of this minor glitch, my first response was, “So you’re the other person who subscribes?”

Kidding of course. BOTH my mom and dad subscribe, so…

Hmmm. *scratches head with index finger* What to write about? *ponders and stares at the ceiling. it hits him like a clue from a Sherlock novel and uses aforementioned index finger to announce to know one his latest thought*

Better yet, details about a super intriguing topic discussed at a top-secret meeting of three writer types last evening. Allegedly there were alcoholic beverages at this event, errr, top-secret event. Perhaps the topic was enhanced from alcohol. Maybe, anyway. Probably positively.

Henceforth we shall discuss DETAILS in writing. Specifically the chosen topic of serial killing. (Yes, my choice. Fucking duh because my blog.)

Now, before you go all critical and say, “What the serious fuck kinda meeting was this?”

Don’t judge. You weren’t there. Convo’s can get outta hand in a really weird way. And this has to do with writing so pay attention.

I’m gonna focus on THREE things in DESCRIPTIVE DETAILS. Before you get all judgy and ask why just three, two words: because fucking alcohol.

Haha, that was three words. Congratulations, you’re awesome at math and counting and stuff.

First, the WHERE and WHY of using descriptive detail.

It’s most common in fiction writing.

Descriptive details portray an image the writer wants to show to the audience. They allow the reader to be captivated, intrigued, drawn into the story, and fulfilled. They offer the reader a sense of belonging through feeling, tasting, hearing, touching, and smelling. It’s an intimate experience and not just words on the page.

I don’t just wanna know about the cup of coffee your killer is drinking. In fact, I could give two different fucks. I want to smell it. I wanna taste it. I mean, hey, I like coffee too. Gimmie. Gimmie. Gimmie. Alert my senses of smell and taste. GIVE. IT. TO. ME.

Don’t just tell me about some stupid pointy knife the killer used. Is it serrated? Let me know how it feels against the skin. Caress my neck with that shit. Or make me feel the pointedness. Whatever. MAKE. IT. HAPPEN.

So your serial killer is driving a van. Who cares? I don’t. Lemme in on the secret. Is it a long white van? Heighten my visual sense to get me involved.

Did your killer drive off at a high rate of speed? Did he do a spinout on a pool of blood in the parking lot? Burning rubber has a sound. Has a smell too. I. NEED. TO. KNOW.

You’re saying, “What the what?”

You’re gonna need some serious adjectives and maybe a few adverbs, but don’t get lazy with those little bastards because they’re the sugar to your goddamn cavity. YOU DON’T NEED ‘IT.

Make your shit as vivid as possible. No, not your literal shit. This isn’t that type of site. We don’t do that here so get it outta your cranial vortex. No fuckity-whawha going on here, man.

Think of your reader as bored. So bored that they don’t really care about what you have to say with your words. The reader is tired too. Tired enough to put your book down and nap like a serious boss. Your words need to transport the reader. The words need to envelope the reader’s senses and take them to where you want them to go. The reader needs to be right there during the killings.

Hang on, that sounded weird, no? Let’s just say that you want the reader to feel sense of belonging.

How’s this done? Adjectives. Maybe adverbs. Use them wisely and you shall be rewarded with golden unicorns.

Your pen is the brush, your canvas the paper, and your words paint the picture.

Now, go forth and be van Gogh. Just don’t mail me your damn ear.

Is he emotionally connected? How does he behave? How’s he plot and think through the murders? What’s his stance on politics? Huh?? Never mind.

Is he too vested in the killings to be able to function in a normal society? Does he make checklists? Is he a narcissist? A loner?

These are things will that allow the reader into his headspace. They give the reader a look from the inside out.

Now you are set to go and kill…on paper.