Why I Don’t Write In A Coffee Shop 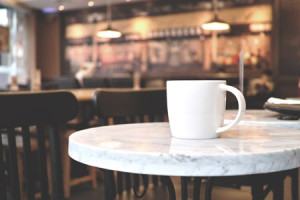 closeup of a cup of coffee at coffee shop

Don’t get me wrong, I love doing coffee shop. They aren’t bad places. After all, there’s the coffee. And the people. Lots and lots of interesting people. And coffee. And more delicious coffee, which I hear they can now pump intravenously into humanoids.

*offers arm, vein side up*

And there’s the furniture. Comfy, cozy, fluid-soaked chairs and couches carrying germs and various forms of, maybe typhoid. And, I dunno, maybe goat syphilis, too. Probably not though. Alas, this is not why I don’t write in coffee shops.

It’s because of distractions. Many, many, distractions. It’s not like I’m a puppy chasing every goddamn thing that moves. Nor is it that I cannot stay focused. Maybe it is a little. Whatever.

Not that kinda grinding, sicko. But I guess that could happen.

Maybe it’s the hipsters. Everywhere. I mean, what-the-beard-wearing-fuck? Or the Twenty-Something-Wannabe-Professional-Sidepart-Bright-Tie-Wearing-Millennials that get to me. So smug.

*remembers he wears a beard*

Nah. That’s not it either.

Harmonic, soulful beats permeate the airspace filling one’s ears with soothing sounds. Sometimes it practically like a spa and I’m ready for a massage.

These are much different than the voices in my head. A lot different.

The constant chatter of voices carrying throughout. Ringing from ear to ear and bouncing off walls to ceiling to floor and back to my ears. It’s an unbearable existence of bibble-babble. An unsociable stew of words hitting the mindspace.

There’s always that one barfwad spewing words so loud he’s waking the dead. Mouth siren doesn’t stop. Maybe he starts to chat on his cell. He’s loud like a motorbike.

Makes me annoyed like a surly alligator. Backoff, I put my crankypants on like everyone else. I’ll make it a batshit uncomfortable horrid experience. You just watch.

It might just be the eyes-over-the-shoulder-lack-of-a-signle-second-of-privacy too. I mean, these skin sacks make the NSA look like they’re using HAM radio to intercept what we say. Also, do I want everyone to see whatever the hell I’m writing?

Okay, the real answer to this question is, yes, eventually, but that’s a mere sidenote here. The right now answer is, not at the exact raw moment it’s being written so what-the-serious-fuck backoff. It’s my space and you’re not allowed in it.

Word salad doesn’t come easy when I’m doing coffee shop. There’s all the pretty colors. The aromatic smells of brewed simplicity wafting about on gentle winds of caffeine. The cinnamon. The vanilla. Oh the sweet vanilla.

Huh, what the hell, maybe it is me. Maybe I’m the one. Maybe I cannot hold a solitary goddamn thought long enough to comprehend it into a complete sentence while I’m coffee-shopping.

Maybe it’s that other writers are there too. Perhaps my thoughts go to, “Hey, what the fuck are they writing? What kinda fuckery are their characters up to? Is their story better than mine? IS IT? Should I stab them now? Or later? Or fuck it, both?”